Shopping Cart
Your Cart is Empty
Quantity:
Subtotal
Taxes
Shipping
Total
There was an error with PayPalClick here to try again

Thank you for your business!You should be receiving an order confirmation from Paypal shortly.Exit Shopping Cart

Custom Sound Project including the

About the Victorian Y Class

The Y class are a class of diesel locomotives built by Clyde Engineering, Granville for the Victorian Railways between 1963 and 1968.

In 1963 the first of 25 general purpose diesel-electric locomotives was delivered and as a cost saving measure, they were built with bogies and motors retrieved from scrapped Swing Door electric suburban trains. With the re-use of these components it reduced the unit cost of the Y class locomotive from around £52,000 ($104,000) to £40,000 ($80,000).A further two orders saw the class total of 75 locomotives delivered by 1968.

Although built to dieselise Victoria's shunting operations and replace steam locomotives on branch line services, they were also used on mainline freight and passenger services.

After closure of branch lines across the state and the end of short pick-up goods trains, use of the Y Class dropped. Withdrawals commenced from 1985 and large-scale scrapings commenced during 1991 and 1992 at which point engines Y101, Y102, Y104, Y150 and Y151 were on standard gauge, Y103 had already been withdrawn in the late 1980s. Y101 followed in the early 90's after suffering a collision, but it was not directly replaced.

From 1995, under the newly formed V/Line Freight division, engines Y115, Y151, Y152 and Y169 were running trains on standard gauge, and locomotives Y124 and Y142 were confined to shunting at South Dynon. Within a few years Y150 had replaced Y115 on standard gauge, with the latter engine shifting to Ballarat as a yard pilot. Around the same time, Y169 replaced Y102, and Y152 replaced Y104. These two engines were stored at Newport workshops, then transferred to South Dynon's "rotten row" where they sat for about a decade. Only two engines - Y152 and Y165 - were repainted into the V/Line Freight scheme, which was essentially the same as previous with a new decal and a lighter grey.

Today four are in service with V/Line as carriage yard shunters and fitted with low speed controls, with others owned by freight operator Pacific National. Seventeen units are officially preserved, though only a handful of those are operational.

DCC with Sound and Light Modifications

In 2008, Austrains released their model of the Victorian Y Class Locomotives which included an 8 Pin socket for easily fitting a DCC decoder plus space in the chassis for small oval speaker.

For this installation we highly recommend the ESU LokSound V4.0 (Sound) or LokPilot V4.0 (No Sound) decoders. Alternatively you may wish to choose an "off the shelf" generic sound decoder like the LokSound Select (Sound), TCS (Train Control Systems) or the Soundtraxx Tsunami 2 and Econami sound decoders which all come with factory programmed EMD645 sounds but not specific for the Y Class.

We offer several different options of DCC installations for this model to suit all budgets.

As our preferred decoder is from ESU, we have been able to tweaked the motor control of the ESU decoder to provide super slow smooth speeds at steps 1-8 of 128 (Speed step 1 of 28) which is perfect for shunting operations allowing the loco to move ever so slowly towards its rolling stock. Also for those wanting the locomotive to move off slowly and build up speed like the prototype. You will be impressed with the smooth slow speed motor control.

Let the manufacturers produce the models and let DCC Solutions do the lights like the real locomotive.

You will now be able to operate all the lights on the Y Class exactly like the real locomotive. That includes a red and white marker operating together on the front and rear of the loco as well as both white markers.

We have an created a custom sound project for the Y Class with the sounds of the EMD 6-645E engine and now with our lighting modifications you can finally own a great sounding Y Class with a more prototypical lighting operation.

is packed with sounds and features!

This feature allows you to simulate a loaded or empty train by pressing the F1 function button. When the button is pressed, the motor will remain at a constant speed, while the sound can be controlled independently by adjusting the speed on the throttle. This exciting, new feature gives the operator the ability to have the train crawl in notch 8 or coast at 100 km/h. Release the Drive Hold function button and you simply go back to throttle-controlled speed and motion. We have designed our very own version of Drive Hold that will stop your loco if you reduced the speed to zero or applied our Working Brake while Drive Hold is still activated. This will not happen with other versions of Drive Hold being offered.

This feature allows you to enter coasting mode whenever you want with a press of a button.Often when coming to a stop, the throttle of a real locomotive is put into Idle and will coast to a stop. Another situation that occurs is that once a train is up to speed when travelling along the countryside, the driver can coast to maintain a certain speed. By pressing the coast function button, the sound drops coasting and remains there. Using the throttle speed control, you can now speed up or slow down the train with the sound remaining in coasting mode.

Press the function button to exit coasting and the sound will exit and return to whatever notched speed is set when exiting.

Press the Brake Function button and your locomotive will come to a stop at a much shorter distance than if you were to bring it to a stop by reducing the throttle speed. Release the brake and your locomotive will move off again or choose to have it remain stationary when the brake is released. We have designed our own version of a working brake that will actually work when Drive Hold or Coasting is activated unlike other version of this feature.

Random Start-up sequences with Move Off and Stopping Sounds

Now with random start-up sequences including hot or cold engine starts, your start up and shut down will not always sound the same.

As your locomotive begins to move off you will hear the sounds of brakes releasing with random speed activated wheel squeal, rail noises and other sounds. Some of these sounds are random or speed sensitive that will turn on/off automatically depending on your take off speed. When the locomotive comes to a stop you will hear the squeal of the brakes, air releases and then the compressor will cut in automatically to fill the reservoirs with air until full and will cut out.

Here is the selection of sound and function labels using the ESU V4.0 sound decoder with 6 Function Lighting Outputs.

Note: The above functions are for the LokSound V4.0 Decoder programmed with DCC Solutions Premium Custom Sound Installation with Light Modification.

The functions and sounds will be different for other brands of sound decoders. To learn how to use these functions see the Info & Help page.

All functions can be reprogrammed to suit your own personal requirements. 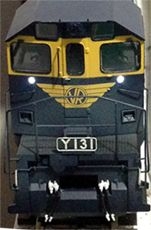 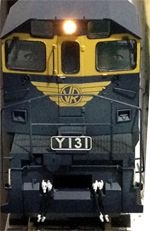 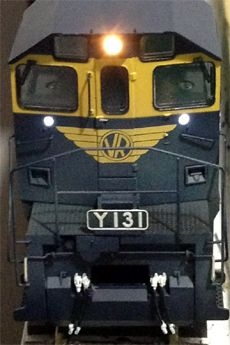 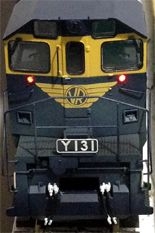 Alternative brands of Sound and Non Sound Decoders of your choice.

Supply only Decoders and Speakers for DIY Installations